The prospect of attracting foreign direct investment (FDI) to Vietnam in 2022 and the following years is forecasted to be very positive. 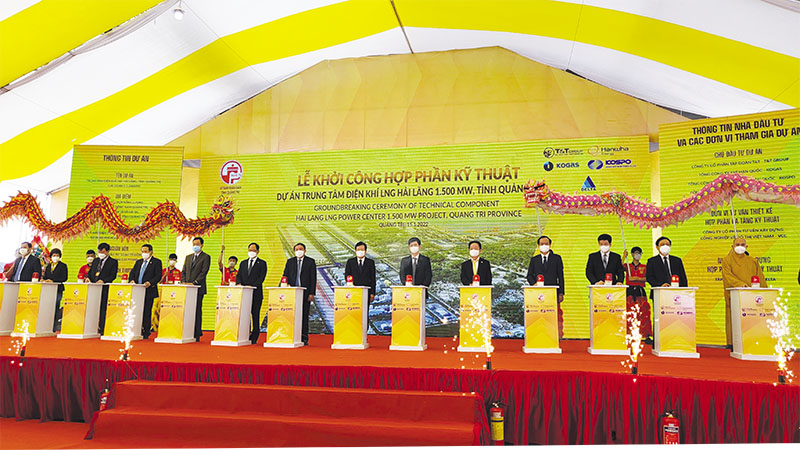 Exciting first month of the year

Although statistics on the situation of attracting foreign investment in the first month of 2022, at the time this article is published, has not been officially announced, but certainly, the number will be quite positive.

The exciting groundbreaking made many people not notice that, right before the commencement ceremony of the Project, the Management Board of Quang Tri Economic Zone awarded the investment registration certificate for the first phase of the Project. . With a total registered capital of nearly 54,000 billion VND (equivalent to 2.3 billion USD), this is the first billion USD project to “crush the land” in 2022. Even more encouraging, when soon after, the project officially kicked off. dynamic, although just starting with the technical component.

According to the plan, the project will be put into commercial operation in 2026-2027. In the immediate future, with this project, the Prime Minister agrees to add phase I to the adjusted Power Plan VII. The next phases will be considered in detail in the Power Plan VIII.

One of them is the Goertek project, which increased capital by 400 million USD, to bring the total investment capital of the project in Nghe An to 500 million USD. In addition, Coca-Cola has also received the investment certificate of a project of USD 136 million in Phu An Thanh Industrial Park (Long An).

Those are large-scale projects, while small projects are also continuing to be implemented. Even a few days ago, BW Industrial Development Joint Stock Company, a joint venture between Becamex (Vietnam) and Warburg Pincus LLC (USA) announced that it would invest in building a ready-built factory in the North Industrial Park. Tien Phong (Quang Ninh) for rent. This shows that secondary investors may pour capital here in the near future.

Not now, but right from the end of 2021, many expectations have been set for the situation of attracting foreign investment in 2022.

The Foreign Investment Agency (Ministry of Planning and Investment) mentioned the plans to expand production activities in Vietnam of large corporations, such as Apple, Samsung, Nike, Adidas, Foxconn… to confirm the trend. positive of FDI inflows into Vietnam.

“The prospect of attracting FDI into Vietnam in 2022 and the following years will be very positive. There will be many large-scale, high-quality projects of the world’s leading corporations coming to Vietnam,” said the Foreign Investment Agency.

But not only is it a subjective assessment from the Vietnamese authorities, surveys from foreign investors also show this.

For European investors, it is reported that 67% of European businesses have a positive assessment of the prospect of Vietnam’s business environment. Meanwhile, the survey results released by JETRO a few days ago showed that 55.3% of Japanese businesses were asked to want to expand their business in Vietnam, only about 1.9% of them had shrinking trend and about 0.3% of enterprises have plans to withdraw from Vietnam.

This figure is probably similar to the positive assessments of Japanese businesses about the prospect of business profits in 2022. Accordingly, 56.2% said that the outlook is “improved”; only 9.6% said “declining”.

It should also be recalled that this survey was conducted from the end of August to the end of September 2021, when the Covid-19 epidemic was still very complicated in Vietnam and widespread social distancing measures were still in place. being implemented, greatly affecting the investment, production and business activities of enterprises. However, looking at the prospects for 2022, the assessments are positive.

Even with 0.3% of businesses wanting to withdraw from Vietnam, according to Mr. Shinji Hirai, JETRO’s Chief Representative in Vietnam, it does not mean that investors will close all of Vietnam. but only diverting production to other countries to make up for the parts that cannot be produced in time in Vietnam.

“In the future, when the anti-epidemic situation in Vietnam is better, they still want to come back,” said Mr. Shinji Hirai.

In fact, this “return” is quite obvious, right from the end of last year, after the Government issued Resolution No. 128/NQ-CP on safe and flexible adaptation to the epidemic. Nike is a prime example and that’s why at the moment, 51% of Nike’s shoes are made in Vietnam. Meanwhile, in China – Nike’s once market-leading manufacturing base – now accounts for only 21%.

Meanwhile, Japan Petroleum Exploration Company Limited (JAPEX) has just announced that it will invest in building an LNG (liquefied natural gas) terminal in Vietnam. And Sri Avantika Contractor Ltd (India) is still continuing to visit localities to survey the location of opening “Pharmaceutical Park” in Vietnam.