Most Vietnamese in the 2022 Forbes global billionaires list saw their wealth increase amid the Covid-19 pandemic last year. 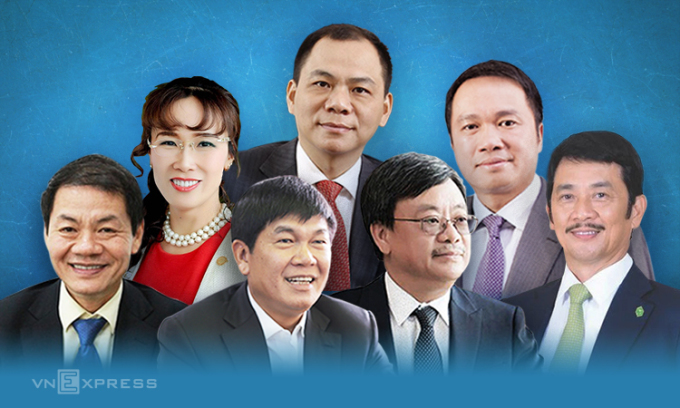 The list features seven of them, the highest ever, including one woman and six men with a collective net worth of $21.2 billion.

Nova Group chairman Bui Thanh Nhon broke into it for the first time.

The rest saw their worth remain unchanged or increase except for Vingroup chairman Pham Nhat Vuong.

Tran Dinh Long, 61, chairman of steel giant Hoa Phat, made it into the top 1,000 for the first time after his wealth increased by US$1 billion over the last year. Long had the highest net worth growth of all Vietnamese billionaires.

With a net worth of $3.2 billion, he is currently Vietnam’s second richest after surpassing Vietjet Air CEO Nguyen Thi Phuong Thao.

It had topped $4 billion last October after the Hoa Phat stock peaked at VND60,000 ($2.62), but the price fell by 25 percent at the end of last year, tracking the 30 percent decline in steel prices in China, the world’s top producer.

His net worth then declined to around $3 billion, but as of March 11, when Forbes measured people’s wealth, the share (HPG) had rallied to VND50,000.

Net worth trajectories of seven richest people in Vietnam. Graphic by VnExpress/Ta Lu

Nguyen Thi Phuong Thao, 51, returned to the top 1,000 after four years with a net worth of $3.1 billion, up $300 million compared to last year, though the aviation industry slump continued due to Covid.

Besides being CEO of budget carrier Vietjet Air, she is also president of leading investment company Sovico Group.

The Vietjet stock VJC has surged 16 percent since the beginning of February following the full resumption of international flights.

Thao first entered Forbes’ billionaires list in 2017 and became the 766th richest person in the world a year later with a net worth of $3.1 billion.

The net worth of Techcombank chairman Ho Hung Anh, 51, and Masan chairman Nguyen Dang Quang, 58, increased by $700 million each.

Anh made the list for a fourth time with a worth of $2.3 billion, and Quang for a third time with $1.9 billion.

Quang’s Masan Group, Vietnam’s fifth largest private company, last year reported a seven-fold rise in profits to VND8.5 trillion as its core businesses were not affected much by the pandemic, and its retail sector even made gains thanks to surging demand during lockdowns.

Its share price doubled to VND170,000 last December before declining to around VND140,000 in January. At the time of writing it is trading around VND150,000.

Tran Ba Duong, 62, chairman and founder of the Truong Hai Auto Company (Thaco), saw his net worth remain at $1.6 billion.

He and his family hold a 70 percent stake in Thaco, the sixth largest private enterprise in Vietnam last year, though it is not listed on the stock market.

Duong’s net worth, therefore, does not fluctuate as that of the others do.

Pham Nhat Vuong, owner of Vietnam’s biggest conglomerate Vingroup, remained the richest person in Vietnam despite his net worth falling to $6.2 billion from $7.3 billion last year.

The Vingroup share peaked last April at VND128,000 but has fallen to VND81,700 at the end of Friday’s session.